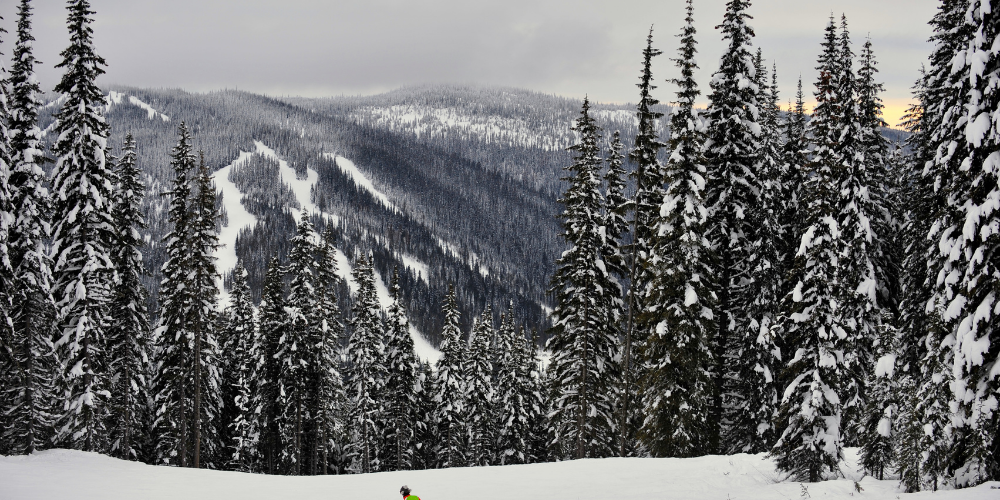 One of the world’s best skiing destinations, a ski trip to Canada guarantees great powder, spectacular scenery, and epic terrain. You’ll have a wide range of options to choose from, including everything from places where long lift lines are never seen to spots where you can glide down the same slopes Olympic skiers have.

No matter where you go in this country, you’re bound to have a great day, or week, of skiing, but these are the most essential ski destinations in Canada.

The site of many of the 2010 Winter Olympic Games, Whistler Blackcomb is one of the biggest draws for skiers across the globe. It’s visited by more skiers in North America than any other and has drawn countless celebrities. It famously hosted Prince William and Prince Harry who spent four days skiing here back in 1998.

It’s made up of two mountains, Whistler and Blackcomb, that are connected by the Peak 2 Peak Gondola. It provides access to everything from fantastic beginner to expert terrain with 200 marked trails over nearly 8,200 acres.

There are many things to do in the village too, including a tubing park, outdoor ice skating rink, shops, bars, and restaurants. Many people find themselves falling in love with this ski paradise, and if that’s you, you might want to consider searching through the real estate for sale in Whistler while you’re here.

The place to go in the Northeast region of the country is Mont Tremblant, a postcard-perfect ski area with a storybook feel and legendary powder. Just 80 miles north of Montreal, it’s often compared to European ski towns thanks to the unique Quebecois culture.

There are 665 acres of skiable terrain on four mountains, including the steepest run in the province with more than 2,000 feet of vertical drop. The village offers an outstanding apres scene too, with all sorts of delicious international cuisine to indulge in after a day on the slopes.

For skiing in the Canadian Rockies, Banff Lake Louise is a gem. It’s often named the No. 1 ski resort in the country with a summit that rises more than 8,650 feet. It has a unique layout with

beginner, intermediate and expert runs that can be accessed from every chair.

If you’ve got a group of friends or family members with mixed abilities, this is your destination. It provides some of the region’s most challenging terrain to the experienced along with gentle slopes and cruising runs, including 145 runs with over 3,000 feet of vertical.

Another Banff destination, Sunshine Village attracts extreme skiers. For the biggest thrills, it’s hard to beat, including some of the world’s highest above-the-treeline terrain and runs like Delirium Dive that require a buddy and avalanche gear. Plus, as one would expect the scenery is jaw-dropping.

One of the world’s snowiest places is the historic town of Revelstoke which is home to Revelstoke Mountain Resort. It was once simply a hill for the locals but today it attracts many to enjoy the biggest vertical drop on the continent – an astounding 5,600+ feet.

As it’s quite a drive from the closest major international airport, four hours from Calgary, it keeps the crowds away providing the ultimate spot for those who don’t want to worry about dodging countless other skiers on the slopes.

© Copyright 2019 Kitchen Design All Rights Reserved.
We use cookies on our website to give you the most relevant experience by remembering your preferences and repeat visits. By clicking “Accept”, you consent to the use of ALL the cookies.
Cookie settingsACCEPT
Manage consent

This website uses cookies to improve your experience while you navigate through the website. Out of these, the cookies that are categorized as necessary are stored on your browser as they are essential for the working of basic functionalities of the website. We also use third-party cookies that help us analyze and understand how you use this website. These cookies will be stored in your browser only with your consent. You also have the option to opt-out of these cookies. But opting out of some of these cookies may affect your browsing experience.
Necessary Always Enabled

Any cookies that may not be particularly necessary for the website to function and is used specifically to collect user personal data via analytics, ads, other embedded contents are termed as non-necessary cookies. It is mandatory to procure user consent prior to running these cookies on your website.